A Closer Look At Reading Music

What Brain Processes Are Used to Interpret Music Notation?

Reading music is a complex task that demands the rapid decoding of several sources of information simultaneously. In addition to the actual physical process of performing the music on a musical instrument, the elements of rhythm, pitch, and expression symbols must also be decoded and interpreted in a short space of time. As these various elements each represent contrasting aspects of the music, the question as to whether the human brain processes them together or individually is raised. Are these aspects seen as a holistic whole, or several different layers of data that require different methods of decoding?

The reading of musical pitch bears many similarities with the reading of language, and the connection between the process of reading music and language has been researched before (Sloboda, 1974; Henson, 1977), and empirically confirmed (Fasanaro et al, 1990). In the same way as someone reading a book will see a word as a whole rather than a collection of individual letters, an experienced sight reader will see a scale, arpeggio, or chord and play it without the need to read the individual notes.

In the same way that the human brain processes mathematical equations and the reading of language differently, is it possible that the same may also apply to rhythm and pitch in music?

Fasanaro et al explored this possibility in their 1990 paper ‘Dissociation in musical reading: A musician affected by alexia without agraphia’. The study focused on a 72 year-old professional musician who had suffered a stroke in the left temporoparieto-occipital region, resulting in a partial loss of various brain functions. The subject was an experienced sight-reader, played the piano, violin, and viola, and did not have perfect pitch.

The study examined the effect of the stroke on the subject’s general neuropsychological aspects, reading skills, and his musical ability skills. The musical aspect examined the ability to read ‘single notes, notes in sequence, rhythms, expressive symbols (e.g. crescendo, decrescendo, pp, ff) and other musical symbols (e.g. keys). Examples of the stimuli are shown in figure [1].’ (Fasanaro et al, 1990).

The results showed that although the patient had retained 100% of his ability to read rhythm, his pitch reading skills were severely impaired. His ability to read several notes in sequence was reduced to 50%, and his ability do so with single notes was now only 35%. The fact that the subject’s rhythmic abilities remained intact, whilst those of pitch suffered such a dramatic impairment shows conclusively that rhythm and pitch are processed by different parts of the brain. In addition to this it was also noted that the results of both the word and note tests bore strong correlations with each other, which shows conclusively the connection between the mental processes of reading language and pitch.

As the brain processes pitch and rhythm separately, it raises the possibility that these two aspects of music should be taught in a manner that takes full advantage of the processes that they are associated with. If pitch is processed using the same part of the brain as that of reading language, perhaps the techniques used to teach the reading of language could also be employed in teaching pitch. The process of learning the alphabet already has a strong musical connection as it is usually sung to the tune of ‘Twinkle, Twinkle, Little Star’, and musical notes usually bear the names of letters of the alphabet, i.e. A, B, C, D, E, F, G. Similarly the techniques used by mathematics teachers to teach division, percentages, and fractions could also be employed by music teachers to teach rhythm.

The relationship between music, reading, and mathematics also raises the possibility that perhaps the reverse is also true, and that English and mathematics teachers could learn a thing or two from the techniques music teachers use. How much more fun would it be for mathematics students to learn about basic fractions, percentages, and ratios through the practical application of percussive rhythm?


What Techniques Do Successful Sight-Readers Use?

In much the same way that seeing a written word as a whole rather than it’s individual letters is a more efficient way of reading, reading music with a broader perspective has also been shown to yield better results from music students. An experienced sight-reader will instantly recognize a series of ascending or descending notes as a scale run, and after the beginning and ending notes of the scale are established the need to read the individual notes becomes redundant. The same also applies to chords, arpeggios, and their variations such as alberti bass lines, and on a larger scale cliched harmonic progressions such as cadences and passing progressions can also be anticipated without the need to investigate the music in detail.

In her 1975 paper ‘Music reading ability of beginning wind instrumentalists after melodic instruction’, Carol MacKnight explored the possibility of teaching music using combinations of notes that she termed ‘tonal patterns’. An experimental group of students were taught to read pitch using tonal patterns of between 2 and 5 notes, and a control group was taught using the traditional note-by-note method. The results showed the tonal pattern approach achieved superior results in sight-reading, and this was reinforced by Grutzmacher (1987) in a similar study, which also found significantly higher achievement rates amongst the tonal pattern group.

In addition to teaching a student to see the broader picture when reading music, the tonal pattern approach allows the student to look further ahead in the music (Gudmundsdottir, 2010a). This frees the student up to prepare for the approaching music in an anticipatory fashion, which has great advantages in sight-reading (Drake and Palmer, 2000; Goolsby 1994a, b; Sloboda 1974). The pedagogical implications of this suggests that the teaching of notes in the wider context of those that surround them would be beneficial, and would lay the foundation for good sight-reading habits to emerge and develop. Perhaps teaching the names of musical pitches in the context of scales or intervals would allow the student to develop a mindset that would accelerate the learning process in the long term.

Drake and Palmer’s paper from 2000 entitled ‘Skill acquisition in music performance: Relations between planning and temporal control’ examined the acquisition of music performance skills amongst a group of pianists, and the relationship of these skills to temporal control (i.e. rhythm, beat, meter, and tempo). The pianists were divided into 5 groups according to age and sight-reading ability, and their progress when learning pieces of music during eleven practice trials was observed. The results of this study found that experienced sight-readers focused more on rhythm than pitch, whilst the opposite was true for the less experienced who focused on pitch at the expense of rhythm. The results can be seen in figure 2. 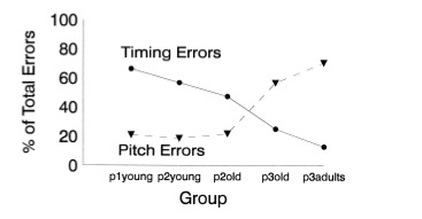 Fig. 2. Results showing which groups focused on rhythm and pitch. (Drake and Palmer 2000).

The findings reinforce previous studies on this subject that found that successful sight-reading is closely related to the accurate reading of rhythm (Boyle 1970; Elliott 1982), and that young sight-readers concentrate primarily on pitch over rhythm (Gudmundsdottir 2010). The results also agreed with previous research that found that advanced sight-readers looked further ahead in the music, giving the performer the advantage of preparing for the music ahead of time (Goolsby 1994a, b; Sloboda 1974).

The outcome of this study raises some interesting questions with regard to the teaching of music notation. Rhythm has a strong bearing on the ability to read music, and the study suggests that young people and those who are inexperienced at reading music tend to ignore this aspect in preference to that of pitch. The consequence of erratic rhythm is the destruction of any sense of pulse and tempo, and the music makes little musical sense to the performer as a result.

The implications of these findings from a pedagogical point of view suggest that the introduction of rhythm before pitch would serve as a strong primary foundation on which to learn to read music. As beginners tend to be weak on rhythm it would make sense to build and strengthen this skill first, so as to reduce the distraction an erratic rhythm would have when trying to learn pitch.  A secure sense of rhythm would free the student up to concentrate on pitch, and would reduce the multitasking demands that pitch and rhythm place on the student. In addition to this a student should be encouraged to read ahead in the music as soon as possible to establish good reading habits, and if less mental energy is spent decoding the rhythmic information more energy can be diverted towards the material that is to come.
Click to continue - The Student's Perspective